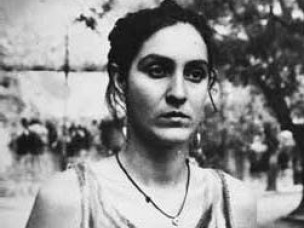 Albena Mihaylova-Bendji was born on 9 June 1959 in Plovdiv. In 1978 she graduated from the Art High School in Kazanlak. She graduated from the National Academy of Arts, Sofia, in 1984 in Professor Galiley Simeonov‘s Graphics class. In the years 1984-1994 Albena Mihaylova-Bendji was an active freelance artist with a number of solo exhibitions, participations in international biennials and a winner of awards. At the center of her creative interest is the recreation of the interrelation between the two-dimensional image and its spatial equivalent. As a result of these quests, unique installations and performances are born. In 1989 she was one of the founders of the legendary Plovdiv art group “RUB”. During that time, the artist inspired and lead the organization of one of the first private galleries in Bulgaria – the Akrabov Gallery, which functioned as a resident center for contemporary art. Within this center, she created an art school and taught art in a method developed by herself. At the same time she was Associate Professor of Drawing and Perspective at the School of Performing Arts in Plovdiv. In 1994, Albena Mihaylova-Bendji left for Zurich at the invitation of BINZ 39 Foundation as a resident artist. As a result of this exchange, she has promoted the gallery under the International Resartist Program and organized the exchange of artists, projects and festivals between Bulgaria and Switzerland. In the period 1995-1998 Albena Mihaylova-Bendji specialized in a Master class in Video Art at the Higher Art School of Basel, Switzerland. In 2008, Albena Mihaylova-Bendji was nominated for the M-Tel Award for Bulgarian Contemporary Art. Since 2008 Albena Mihaylova-Bendji works as a documentary filmmaker and is a screenwriter, director and cinematographer. In 2009, she found a platform for cultural exchange, exhibitions and film festivals at Basel Culturinstitut AM contemporary. Currently the artist works and lives in Basel. Her creative biography includes her membership in the artistic group “VIA Audio Video Art”, her work in the governance of the creative union “VISARTE BASEL” and she leads workshops for Artlink Bern and Solothurn Higher Pedagogical School. She is a member of “Balimage”, an association of filmmakers and video artists, and the “Art Book Forum Basel”.