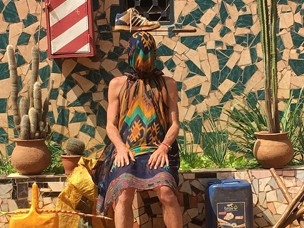 Voin de Voin was born in 1978. He lives and works in Sofia. He holds an MA from DasArts, Amsterdam, and diploma from Gerrit Rietveld Academy, Amsterdam, Goldsmith College,School for New Dance Development, London, EICAR –International School for film and cinema of Paris.

Since July 2016 he is running an independent art space in Sofia called ÆTHER. Since 2018 a sibling space Æther Haga in the Netherlands, together with Marie Civikov. He is the  initiator of Sofia Art Week SAW, since 2018. Currently Voin is a fellow at Solitude Akademie Stuttgart, with whom Æther will partner for the next couple of years in exchange fellowship program for artists exchange between the two countries together with Swimming pool and Radar Sofia.

Voin de Voin’s videos and performances examine the high demands on the performativity of our lives. They mix elements of social and psychological analysis of systematic society designs with its irrational manifestations. The events are accompanied by the entire symbolic apparatus that sometimes has precise meanings, but other times has more independent and aesthetic qualities and it is composed from individual tastes of their participants. - Edith Jerabkova