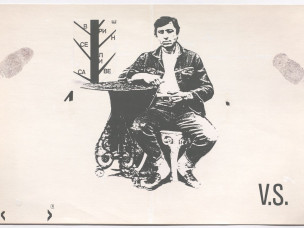 Vesselin Sariev (also could be found as Vesselin Sarieff) (1951 – 2003) was a poet, writer and researcher of the past from Plovdiv. His first visual poems date back to the late 1980s. These visual poetry pursuits are also associated with the desire for expanding the field of traditional poetry, where he is already an established representative, and for creating a global network of visual poets corresponding through the mail-art movement. In the archive of Sariev we find data of his intention to make an international project for visual and experimental poetry from 1988. These ideas unfolded after the fall of the Berlin Wall and the changes in Bulgaria in 1989. The enthusiasm of the first encounters with freedom of speech, the possibility of uncontrolled correspondence with the western part of the world reflected in Sariev‘s creative activity and poems, gave him a real opportunity to realize his ideas.

During the 1980s and 1990s, Sariev created a number of visual poems that he exchanged with other poets around the world; published in international publications including UNI Vers, Brain Cell, Mani Art, The Secret Life or M. Duchamp; participated in international exhibitions and festivals; published his visual poems in the Bulgarian press: “21 vek”, “Svoboda”, “Kultura”. Between 1990–1991 he published “SVEP – magazine for visual and experimental poetry” in four issues. In 1990 he published 22 author‘s cards with visual poetry, for which he made a stand in a central bookstore in Plovdiv. In the archive of Sariev we find a letter addressed to the Sheraton Hotel, Sofia, where he intended to make a similar stand for visual poetry.

The main part of Sariev’s archive today is the correspondence with the Chilean immigrant Guillermo Deisler, who lived in Plovdiv in the 70s and 80s and was the main inspiration for Sariev’s activities in visual poetry and mail art. Vesselin Sariev remains without followers in Bulgaria. Today, Vesselin Sariev’s visual poems as well as SVEP’s editions are in the collections of MoMA, New York, TATE Modern, Getty Research Institute, Los Angeles, Akademie der Kunste, Berlin and others.