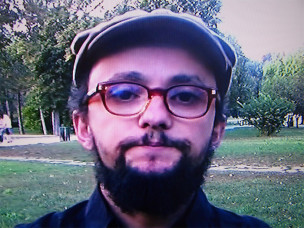 Samuil Stoyanov (1975) is visual artist who lives and works in Dobrich, Bulgaria and Arusha, Tanzania. In 2001 he graduated from the National Art Academy, Sofia as MA in Ceramics and made his first solo show with oil paintings. Some of his latest solo shows are Reverse, 2017, Contemporary Space, Varna, Bulgaria and Evening News 2014, Formatokomodo Gallery, Madrid, Spain. At 2017 Samuil took part in The Image is No Longer Available Exhibition in three galeries with curator Vessela Nozharova, ICA - Sofia. At 2013 he took part in two big international events – The 5-th Moscow Biennial, entitled More Light, with curator Catherine de Zegher and Sofia Contemporary Festival, Near, closer, together, curator Ovul Durmusoglu. In 2012 Samuil Stoyanov participate in 53th October Salon in Belgrade, Curators: Branislav Dimitrijevic and Mika Hannula. At 2011 and 2009 Samuil Stoyanov won the RUF Award and BAZA Award - two of the biggest prizes for contemporary art in Bulgaria. The BAZA Award which is part of the Young Visual Artist Awards of The Foundation for a Civil Society provides him a residency at the International Studio and Curatorial Program (ISCP), New York in 2010 and also a solo show in ICA-Sofia Gallery, in the same year. Samuil was represented in Frieze Magazine by Nedko Solakov for the anniversary issue 141, September 2011(20/20 article) and in 2012 was included in The Bulgarian Nouvelle Vague – a book published by Edno Magazine, which presents 101 representatives figures from the avant garde of contemporary Bulgarian culture.