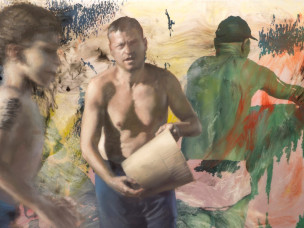 Dimitar Genchev (b.1985 in Bulgaria) lives and works in Plovdiv, Bulgaria. He received his education from the National Academy of Art, Sofia, HKU University of the Arts in Utrecht, and participated in the residency programme at Rijksakademie, Amsterdam. His works have been exhibited in Museum De Domijnen Hedendaagse Kunst, Sittard, the Netherlands, Sofia City Art Gallery, the Royal Palace in Amsterdam, Kaskadenkondensator, LISTE international contemporary art fair in Basel and Gerhard Hofland gallery in Amsterdam, among many other spaces. Over the past five years Genchev has received awards and scholarships from the Mondriaan Fund foundation, awards for painting: the Buning Brongers Award in the Netherlands, the national competition of Allianz Bulgaria for painting and sculpture for young Bulgarian artists, and the Gaudenz B. Ruf Award. In 2016, Genchev’s paintings were selected by curator Noor Mertens for participation in the Perspectives and Concepts exhibition, part of Art Rotterdam. His works were exhibited in the exhibitions Listen to Us – Artistic Intelligence – works from the Deutsche Telecom collection, BACKGROUND: Young Artists from Plovdiv, organised by Sariev Gallery, and Object Love, displayed at Morsbroch Museum in Leverkusen, Germany.