Monika Popova is an author who Sariev Gallery has been working with since its opening in 2004. She participated in most of the group exhibitions and projects of the gallery and in 2008 realized her solo exhibition entitled “If that is how love affects me…” (ceramics). Emblematic for her creative work are the already shown anatomic ceramic hearts, porcelain squid-like jars, covered with Egyptian writings, the “feminine” art-installation, which consisted of pieces of long stitched cloths, part of the “Stitch” project. Monika Popova is one of the artists, who correspond to the new policy of Sariev Gallery for presentation of contemporary art with strong conceptual identity. She is a reflective artist with contemporary artistic means of expression.

THE STITCHED is an exhibition of paintings (acrylic, oil, embroidery), dimensions: 170/200, 170/120, 120/100, 50/100, which includes new works as well as already shown ones in “Eros of the Impossible”, “Union of Bulgarian Artists” gallery, 6 “Shipka” street, Sofia, 2002 and “The Air of Air” exhibition, “Art-Alley” gallery, Sofia, 2006. The present selection of works, made by Sariev Gallery, puts an accent upon the author’s specific means of expression, the embroidery.

Monika Popova definitely expresses her affinity, to analyze the subconscious, to show a tearing, unrestraint emotion and drastic connections between images. The stitching/ embroidering in her vigorously drawn paintings, has a specific role in accentuating upon a particular emotion, the initiation in the mystery of the gender opposition masculine – feminine and the underlining of her personal feeling of transience. The stitch is swift, with a big needle and thick thread, it is like a basting. It represents masculinity, an allusion to the conqueror-like type, the adventurer.

Graphically it reminds of the street subculture style, the suspension and impatience. Embroidery is an occupation typical of women, requiring perseverance and humbleness to subordination and isolation from the outside world. But Monika shows different embroidery, which is not tapestry-like, not diligent. The filling of the images aims emphasizing of the personality. She violates the feminine occupation, for the sake of revelation. Embroidery in the paintings is a result of her feminine intuition for creation of consistency and hierarchy.

The stitch in her erotic paintings accentuates the sexes and connects them, it finds the erogenous zones, but at the same time, impresses a sense of overwhelming loneliness by breaking up the human body. In Monika Popova’s works the background (in situational or cultural aspect) is often notionally impaired or manipulated. The paintings which express the emotion of flying, impress a sense of freedom, but the basted parachute in them reminds of the control, and the embroidered figure of the parachutist – of gravity and transience of time.
As an artist, who uses symbols and signs (she is Ph. D candidate in Egyptology) very often Monika Popova has Egyptian and Glagolhic writings in her works, but the accentuated through embroidery figures or details give an unexpected meaning of the context.

THE STITCHED paintings express the artist’s free will, but also an inner self-control, which restricts the extreme of her drawing, a kind of self-analysis which define her as an author with contemporary sensibility, and THE STITCHED as an exhibition which goes beyond the esthetic criteria and puts actual, existential questions. 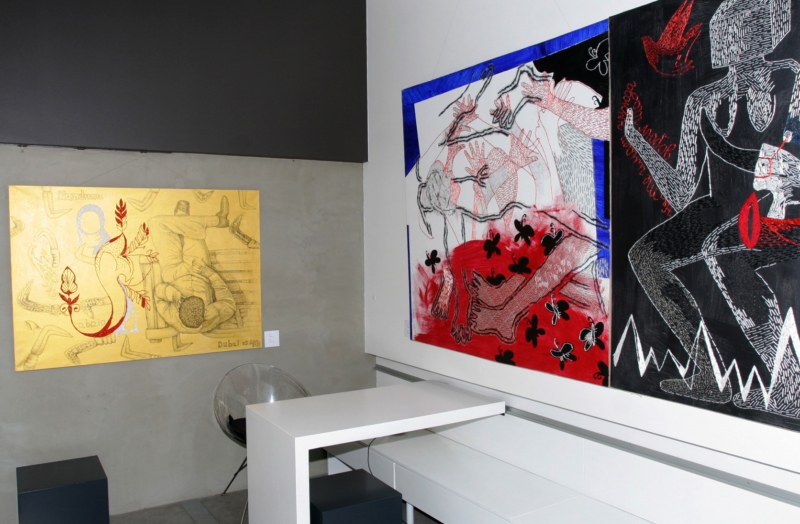