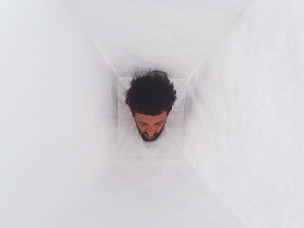 The artist Michail Michailov uses in his works different artistic media such as performance, drawing, photography, video. In his approach he deals in a playful manner with his own "self" or "I" in relation to his environment/surrondings/situation. Questions about the human presence/being are being asked. Success and failure, self-discovery and self-doubt, the quest for happiness, the transcendence of limits are recurrent topics. In doing so he uses his own name(s) and personality as a metaphor for the existence, the I and the pursuit of individual self-fulfillment in a globalised society. He takes on different cultural phenomena which influence human behavior and questions a striving for perfection society.
In his creative processes Michailov helfs himself amongst other various 'parasitical strategies', like for example the manipulation of advertising posters of art museums or uses the works by other artists as a basis for his own art works. Through interventions in the public space Michailov refers to and manipulates the spatial environment, which leads to irritations and new ways of seeing.

In his drawing series "dust to dust" (2014 - 2018) he dedicates to these fluffy balls of dust and stains, which have been gradually gathered in his studio, by accurately depicting them with coloured pencils on paper. By doing so he moves - on the one hand - to an unobserved running phenomenon - the gathering of dust and dirt in our consciousness and on the other, through this he uplifts the dirt into a piece of art. The intensive effort which the drawing reproduction process takes, stands in a strong discrepancy to the actual value of the primary material.
- Elsy Lahner, Contemporary Art Curator, Albertina Museum, 2017