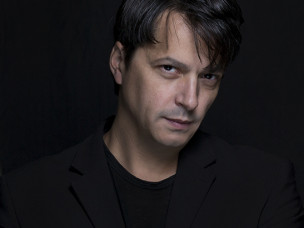 Boyan Manchev (Sofia, 1970) is a philosopher and writer. He proposes the perspective of a new ontology of existence, described as modal ontology, and dynamic materialism. The search for a new philosophical form and possibility for new expression of ethical, aesthetic and political experience has been central to his work in the past twenty-five years.

Manchev started teaching at the Sofia University in 1997. He is Professor of Philosophy at the New Bulgarian University (since 2001) and Guest Professor at the University of the Arts, Berlin (since 2010) and Hollins University (since 2014). He is also former Director of Program and Vice-President of the International College of Philosophy in Paris (2004-2010)  and Professor at the HZT – UdK Berlin (2011-2017). Manchev has lectured widely at European, Asian and American universities and cultural institutions. He has organised and/or collaborated to number of projects, congresses and public forums dealing with philosophy, art and politics. He has also contributed as author, theorist, dramaturge, actor or curator to visual arts, theatre, cinema and contemporary dance projects.

Manchev is member of the editorial committees or boards of the magazines Lignes (Paris), Critique and Humanism (Sofia), Materiali Foucaultiani (Rome / Paris), Stasis (St. Petersburg), and the publishing house desorganisation.org. He is also founding member of the artistic collective Metheor.